Though sightless, joyfulness was always in his heart - Bahadur 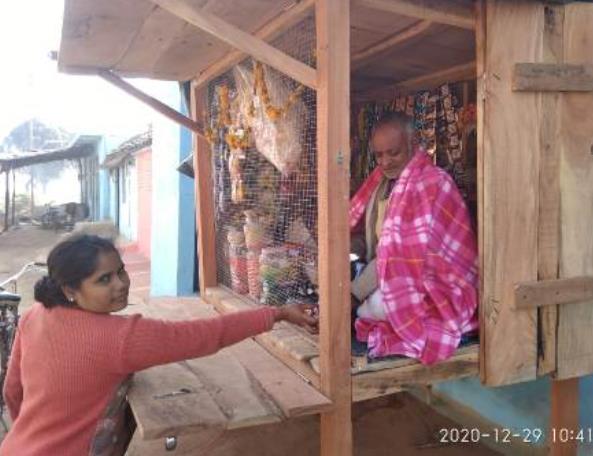 Bahadur (which in English means Courage) is a truly courageous 45 year old man. As a 7 year old, he contracted smallpox and lost his eyesight. "I am not very bright, so inspite of repeated efforts I could not learn Braille and thus remained uneducated," he says.

He has an interesting life story. He and his family members were very sceptical about our intentions. Mainly because Bahadur's efforts to create a life for himself had not fructified. "Children throw sand at us, laugh and run away," he rued. "My travels and quest for a good life took me to Banda (a small town) where i enrolled in a chair re-caning course. We received no stipend or payment for chairs re-caned, only food." So Bahadur left. He then went to Gorakhpur, an important town on the Indo-Nepal border. There he learnt the art of making cardboard boxes for sweetmeats. However, he says, I wanted to be educated. So his travels took him to Gwalior, Lucknow (the capital city of Uttar Pradesh where both Jalaun and Pratapgarh districts are) but he failed to secure admission. His quest for education led him northwards to the holy city of Hardwar, where he secured admission in a school for the blind. However, he alleges, they were always kept hungry, not being served adequate food. "So then I travelled to the other holy city of Mathura where Braille was taught." This time a fellow student was severely beaten by a teacher so i protested and fought with the teacher." The next day he ran away for fear of receiving a thrashing himself. I returned after a few days, but was denied admission on grounds of being over-age.

Bahadur returned home. He had a loving mother, he says. She saw to it that he got food on time and clean, washed clothes to wear. After her death, he says, he has been despondent. His father is caring but old. With tears in his eyes, he confessed that he was worried about his future and enquired with fear in his voice whether he would have to pay for the training that we said we would give him. We reassured him that it would be free.

He has a good disposition, is cheerful, well liked in the community and also an invitee to all community functions. He himself is single, has two elder brothers and a father and two nephews. By village standards, he is not poor. He has a small land holding and also receives the Disability Pension.

Initially, he found the rigour of training difficult, having been free-spirited all his life! Soon however, he got into the rhythms of training and started enjoying the DLS training, as he learnt to look after his own clothes, light the fire, thread a needle, recognise the different weights and distinguish between the various currency notes. "I am now ready to run a shop," he declared two months after our training started! Which he now runs successfully. Meanwhile we have facilitated his bus and rail pass and have applied under other government welfare schemes.

"I want to work really hard, earn money and then help other blind persons. Only a blind can really help another blind." He profusely thanks AICB for giving a direction into his life!